Can UMNO avoid the fate of the Italian Christian Democrats?

LOOKING at the Barisan Nasional (BN) electoral results in the 14th General Election (GE14) (2018) and GE15 (2022), I cannot avoid seeing many similarities with the political history of my country, Italy: indeed, the so-called Belpaese, experienced similar facts and trends but 30 years in advance.

Like Malaysia, Italy was led by the same political coalition from 1946 until 1992; the coalition was led by a party called Democrazia Cristiana (Christian Democracy or DC) with the political period characterized by the DC leadership is called First Republic.

As it can be seen from the graph below, the DC collected almost 40% of the votes until the 1980s and it constantly remained above 30% until 1992 (this percentages are very high in the Italian political scenario which has always been characterised by a relevant degree of fragmentation).

Since then, the party disappeared from the Italian political landscape (some small political formations claim to be the heirs of the DC but they are practically irrelevant today).

What happened in 1992? The early 1990s were a very difficult period in Italy.

While Toto’ Riina’s mafia was inflicting the state the strongest attacks ever with the killing of two top anti-mafia prosecutors, Giovanni Falcone and Paolo Borsellino, a deep corruption investigation shacked the political system from within. 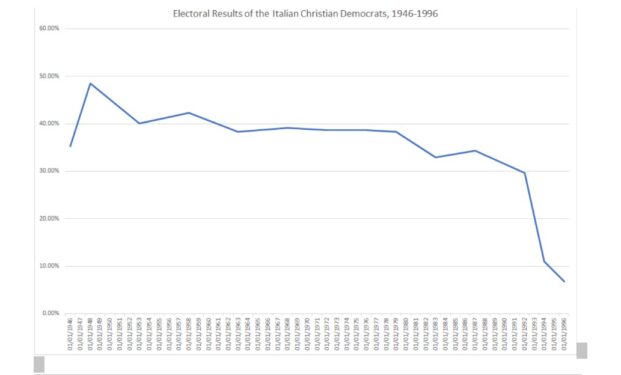 The Christian Democrats and their main ally, the Italian Socialist Party (PSI) led by Bettino Craxi, were accused to have built and developed a deeply corrupted system that affected every aspect of the Italian social life: each tender, each project and so on moved ahead thanks to bribes.

Well, I guess that everybody already knew how the system worked, but the investigations revealed how systemic the situation was and this generated a huge outrage among the public (Craxi faced people throwing coins at him outside his hotel in Milan and lived the rest of his life in exile).

These accusations – together with the alleged relationship with the mafia in Sicily – nailed the lid on the DC and PSI coffins.

However, while I do believe that these events were crucial in wiping out the ruling class (which unfortunately was replaced only by less capable people), the process that brought to the end of the historical parties began earlier and probably the most significant year to be remembered is 1989: the fall of the Berlin Wall and the end of the cold war.

With the end of the US-USSR confrontation, the reason that had kept together the ruling coalition and brought many to vote for them despite everything – anti-communism – lost its meaning.

While these events were taking place, DC and its allies appeared unable to keep pace with the historical evolution, as their main concern was to remain in power.

The lack of a real political alternance during the previous decades made them too self-confident and this impeded the ability for them to renovate from within. Unable to interpret the changed historical conditions, they eventually condemned themselves to the political irrelevance.

The parallelisms with the Malaysian scenario are not difficult to be grasped: long political predominance by one coalition, corruption scandals, change of historical scenario.

All these factors call for a process of change which is now involving not only UMNO but the entire political spectrum: the inability for each coalition to secure a parliamentary majority is indeed the sign of a transformation process.

I believe that the decision of not running with PAS for GE15 and some innovative elements in BN manifesto show that UMNO is aware of the necessary change.

The electoral defeat should not be interpreted as a sign that that process of identity renovation was not necessary; quite the contrary, the reflection initiated during the most recent political season needs to be brought forward.

UMNO is at a crossroads: understanding the international and domestic changes and renovate the party in order to interpret and to answer to those changes – or gradually facing the fate of the Italian Christian Democrats. A fate which, however, is not inevitable. – Nov 23, 2022

A director chair for the Malaysian economy

Can UMNO avoid the fate of the Italian Christian Democrats?

TACKLING INFLATION WILL BE PAINFUL

GOVT MUST RETHINK TOBACCO POLICIES THAT COULD CAUSE MORE HARM

INFLATION IS NOT (JUST) A MATTER OF SUPPLY CHAIN DISRUPTIONS